What has Pharmacy got to do with the riots? 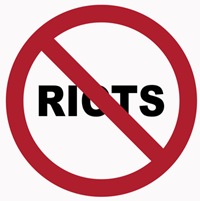 The nation continues to face up to the aftermath of the riot that started in London and spread to different parts of the country. The perpetrators, the instigators and those just swept up in the whirlwind of mass behaviour are being identified and facing the full wrath of the law. A number of commentators, politicians, law enforcement officers and researchers are offering a number of reasons why these riots might have occurred and what the strategic solutions might be to prevent future occurrence. The following are a flavour of the range of views:

“Why should tax payers’ money go on benefits to those committing these crimes?”
– James Clappison Conservative MP (1)

“I think most people looking at the concept of restorative justice will say: why aren’t they working? Why aren’t they doing something that put back into society…work is far better option”
– Tony Lloyd Labour MP (2)

“I regard it as a largely criminal riot. We can infer from their action that people who took part in the riot didn’t really care much about other people from what we see them doing”
– James Clappison Conservative MP (3)

“Even I as a middle-aged semi-intellectual gay man living in London find them (schools) horribly feminised places; god knows what a rambunctious small boy who wants to be out playing football thinks when they go into school”
– David Allen Tottenham resident and member of the local Conservative Party (4)

“This is about the quality of leadership in our schools”
– Sir Michael Wilshaw, principal of Mossbourne community Academy in Hackney (6)

A range of view from Tottenham from ordinary people

“This must be a wakeup call for our country. Social problems that has been festering for decades has exploded in our face…people want criminals robustly confronted in our streets, they want to see these social problems taken on and defeated. A concerted all out war on gangs and gang culture”
– David Cameron PM on Zero Tolerance of gang culture (7)

“These behaviours has disgusted us all. It cannot be allowed to stand, we will not allow it to stand…to seek to explain is not to seek to excuse…we all have to ask ourselves why are there people who feel they have nothing to loose but everything to gain from wanting vandalism and looting? The causes are complex”
– Ed Miliband Labour Leader (8)

“Whilst social media has been important for coordinating rioters, it is also important for people that are caught up in the riots. It may well be that the tweet crying for help is the thing that saves you from the burning building”
– Andrew Lilico of the ConservativeHome website (10)

Is Inner city planning (or gentrification) the issue?

“People don’t commit crimes thinking about the sentence. That’s the sad, practical reality. A great many crimes committed in the heat of the moment: crimes of violence, often crimes of acquisition. People are driven to commit them for all manner of reasons.”
-Paul Mendelle QC (11)

*MUST LISTEN*
“Most of our lives are spent in the company of others and we don’t think very much. In fact independent thinking to humans is like swimming to cats: we do it if we really have to. If we live with other people and we do what other people do, this kind of things are going to happen…Most of us are easily swayed by what is going on around us…very often its the fact that everyone else is doing it as opposed to the thing itself”

“The issue is weather the penalty is for the individual who is committing the crime or for others to discourage them from doing it. If it is for others, then the stiffer the penalty the more effect it is likely to have on others”
– Author Mark Earls (12)

What has been refreshing in the series of debates on the riots, has been the rational and measured way in which it has been conducted. I have no doubt that the problem is multi-factorial and rational attempt to unpick these issues are necessary. The riot is a senseless charade which I echoed in my previous post. There is a role for stiff penalties for those who show a clear lack of remorse for the damages caused. There will be others who, in the cold light of day, realise the absurdity of their action and are genuinely remorseful. They should have the opportunity to have a degree of restorative justice.

In all of these, what has Pharmacy got to do with it? Clearly some pharmacies were targeted by the rioters but that is not why I am posting this. In July, I eluded to a vote to allow Pharmaceutical Scientists membership of the Royal Pharmaceutical Society (13) – guess what? Members voted Yes to the special resolution.

Why is this significant?

In 2008, I described a lack of self-belief in our role as community pharmacists (in particular) and pharmacists (in general) (14). One of the reasons I proposed for this perception was that we are pharmacists because we failed in our bid to get into medical school. This is a reality for some who studied pharmacy but not necessarily so for others. Pharmacy is an important profession with a different sphere of expertise to say: medical profession. In any case those who eventually studied pharmacy (but not their first choice) are developing satisfactory careers in the profession of pharmacy. That lack of self-belief should not be there. In any case some of the barriers to self-confidence and self-determination are being removed.

One of the many reasons attributed to these riots is the lack of aspiration in a class or cohort of the society. It is becoming clear to me that by its actions, my profession (in a small way) is doing its bit to contribute to the aspiration debate whereby hard work, diligence and dedication to what matters is rewarded at the highest levels. We therefore remain a profession of aspiration. It is moves like this that is changing our social fabric and will undoubtedly have significant impact on aspiration in years to come.

If these real changes are happening, then the onus is on individuals (with help of government), to exploit opportunities and not accept a defeated and defeatist  attitude to their special sets of circumstances. Breaking the law in such grotesque manner does not pay. There is another way! The question is: are you ready or willing to choose it?