Life can only be understood backwards; but it must be lived forwards.

The words of Kierkegaard is relevant to this post. Other writers, including the famous Steve Jobs, have described the reflection process in much similar lines. Steve Jobs was quoted in his Stanford lecture as saying:

You can’t connect the dot looking forward, you can only connect them looking backward, you have to trust that the dots will connect in your future, you have to trust in something: gut, destiny, life, Karma whatever because believing that the dots will connect down the road will give you confidence to follow your heart even when it lead to a well worn path and that will make all the difference

I will use this post to reflect on a presentation I gave in February 2008 to the now defunct Southampton Branch of the Royal Pharmaceutical Society of GB. The question must surely be why? I am at a cross road and as I move forward with the final phases of the projects, I will like to gain a better understanding of events by looking backward. I hope you will join me in this journey of reflection. This post is also to mark the launch of our YouTube channel. Over the next few months, we will start posting videos on different aspects of pharmacy practice there. I agree with my Twitter friend: Thorrum Govind (@thorrungovind) when she tweeted (figure 1):

to which I retorted:

Couldn’t agree more but always great to reflect on the past to make the now and tomorrow better. 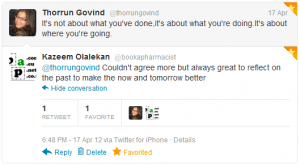 A good starting point in this reflection journey is to view the feedback from that presentation. We posted this feedback video 4 years ago on the muronline YouTube page and I have embedded it below:

If you haven’t seen it, I employ you to take a few minutes to view it. If you have, then the obvious question is this: what was the contents of the presentation (attended by over 40 pharmacists) that triggered the feedback? You will not have to wait long because as part of the launch of the bookapharmacist YouTube Channel, I am releasing the full presentation. But wait. There is something you need to know about the days leading up to the presentation.

Days leading up to presentation

Southampton Branch used to be the local arm of the Royal Pharmaceutical Society of GB and my friend Jaggy Khela was the chair. Over the previous year (2007), a team of 5 pharmacists (lead by myself) have been working on an MUR project: codename Bedfordshire. We planned to launch the project to our pears in February of 2008. As part of the launch strategy we produced a series of 3 podcasts in December 2007, January 2008 and February 2008. The Southampton Branch event was designed to be the finale. The plan was simple: To get a panel of experts together to discuss the importance of MUR and for our project to support the event – you know like drug companies support local events (We will have a stand to promote our project). We agreed the expert panel, printed the flyers and embarked on the promotion strategy for the event.

One day before the event, I got this exasperated phone call from Jaggy to say all the key experts for the event had pulled out! Effectively we were going to fall flat on our faces if we didn’t think and act fast. As the project lead, the responsible fell on me. The only way forward, as I saw it, was that I will have to write and deliver the presentation. So I went to work the day before the event. If you know me, I only do presentation when I have to. I don’t particularly like to but I will when I have to. That is the background.

What you are about to watch is the video of my slides with my spoken comments in the yellow boxes on each slide. I apologise for the quality of the video and will make sure subsequent videos are of better quality. To get the best out of the presentation, change the resolution to HD (High definition) and maximise the screen (figure 2)

There are a number of things that struck me about this presentation which I will be reflecting upon:

I was taken aback by my level of frankness in this presentation. It would appear that when my back is faced to the wall, the most effective response is to be honest and open about why we did what we did. I issued disclaimers to anyone listening that:

Some of my thoughts in this presentation are not validated and therefore may be right or wrong or that I simply don’t know.

I am frankly not surprised. I was speaking from the heart. I was speaking on a subject I was/am passionate about. I was speaking about pharmacy and on how pharmacy can be an integral part of the multidisciplinary team in the community. In the light of what has gone on since, you (the reader) will have to decide whether my hunch was right. It shouldn’t matter who is saying what. The quality of what is being said should be the overriding factor. When I said towards the end of the presentation that:

SOMEBODY SOMEWHERE has decided that we are medicines experts ( I happen to agree).

That SOMEBODY, also happen to think a conversation with our customers in a formal environment is valuable.

That SOMEBODY, will pay us to deliver this service and
FINALLY, we can now take our rightful place as an integral part of the multidisciplinary care team in the community.

In light of what has happened since, is my observational conclusion invalid because I didn’t know who that somebody, somewhere is?

If you were in that room that day how would you have reacted to the call of a colleague?:

The invitation for the event went out to a lot of pharmacists. Only a few made it. If you are one of the few that didn’t make it to the event, would you have been positively or even negatively affected by the presentation? This is why I always advise that pharmacists attend as many of these events as possible because you never know what might be gleaned. Our project wouldn’t have started if I hadn’t had a chance conversation with Mr Kaderbhai in one of these meetings. There is another series of meetings coming up soon. I hope you can attend.

At the very end of the presentation I described one of my vision to be:

I want to be organising a national MUR Evangelist convention in about 2 years time.

4 years on, I am yet to realise that vision. I still believed that had everything gone the way I desired it, I would have been organising a national MUR Evangelist convention now. As with most things, humans with their anxieties (and other stuff) get in the way. It is however a vision I still very much harbour and God willing it will happen.

The roles played by Jagjiwan Khela, Richard Andoh, Cyril Siou, Perveen Bhardwaj leading up to this presentation and afterwards was immense. I cannot help but mention the hard shift put in by Kate Penhaligon, in her role as ‘Podcaster General’. Kate by the way is a pharmacy technician who worked partly in the community and mostly in the hospital.

Subsequent to this presentation, we approached a lot of pharmacists personally and via emails. I will like to make a special mention of the following pharmacists who played remarkably critical role in energising me when my hope for this project started to wane:

Is anything I said in my presentation remotely original? I doubt it. But how does one motivate someone who has exercised a self directed initiative? A little support and encouragement, I feel is important. On one narrow point at least: Some things have a greater impact when said by certain somebody with certain sets of special circumstances. Subsequent events have proved that to be true. Nonetheless, it is times like this that I remember that song by Johnny Cash: ‘The boy named Sue’ (video below):

And he said: “Son, this world is rough
And if a man’s gonna make it, he’s gotta be tough
And I knew I wouldn’t be there to help ya along.
So I give ya that name and I said goodbye
I knew you’d have to get tough or die
And it’s the name that helped to make you strong.”

He said: “Now you just fought one hell of a fight
And I know you hate me, and you got the right
To kill me now, and I wouldn’t blame you if you do.
But ya ought to thank me, before I die…

….And I came away with a different point of view.
And I think about him, now and then,
Every time I try and every time I win,
And if I ever have a son, I think I’m gonna name him
Bill or George! Anything but Sue! I still hate that name!