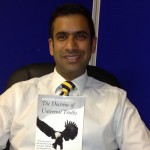 It was in March 2007 when I made a proposition to Perveen about a project I was planning. It was a simple and direct proposition. It went something like this:

‘Hello Perveen how are you and the family? Hope all is well. I am planing a MUR project: you know the same MUR that most people seem to be against. It will take about a year and will cost about £x. There is no guarantee that it will be successful but the amount you put down will be your proportional stake in the project. I just feel that this MUR thing is very important to what we do as pharmacists and will be glad if you can come on board.’

I went away hoping against hope that he would say yes to my proposition. Judging from the precarious position of my finances (Doctrine of Universal Truths), there was no way I could have embarked on the project without some financial support from my colleagues.

In the end, I needn’t have worried. He was the first person to say yes and I observed in my ‘Doctrine of Universal Truths‘ that:

When first floated the idea of an MUR project, he was the first person to say yes. He not only said yes – he also put down the highest sum of money……For what was a blank canvas, I saw this as a vote of confidence in me.

It will appear that our missions were aligned.

In September 2013, I sat with Perveen to do an interview and I was blown away…again! He is now a husband and a dad. I present our Case Study 9 interview of Perveen Bhardwaj – Now an Area Manager with Rowlands Pharmacy. Click here for the interview.

The following are some quotes:

We shouldn’t loose the fact that there is a great clinical need (for MUR).

For people who do fail, it is not the end of your career; it seems bad at the time but it I feel it made me a better pharmacist by making me go over things I didn’t know the first time.